A recent ride with a Lyft driver introduced me to a part-time manufacturer of wands. Yes. magic wands. Princess wands. Fairy wands. Wands for witches and wizards. My driver described his wand-manufacturing process. He walked me through the “add-ons” and respective price points.

Since part of his customer base is witches and wizards, I asked him how he introduces the actual powers that enhance the “common” wand for, let’s say, a faux Disney princess, to elevate it to a wand actually being employed for spells and magic. Or how a wand he is creating for a wizard becomes energized.

He admitted that he originally ruminated over this until he was reminded that the tool is just a tool. It is the user of the tool who gives the tool its power.

It’s not the wand. It’s the wizard and magic that conjures the spell

A tool is a tool until it is picked up and put to use by the holder of the tool.

This is certainly true of artists. A brush is just a brush until a master artist picks it up. Historically for some artists, especially in the countries and islands of Asia, brushes were considered a sacred part of their art of calligraphy. It was felt that the chi energy flowed from the artist through the brush and then back into the body. Tools were treated with respect.

The Art of Calligraphy

Artists are buried with their calligraphy brushes

When the brushes used for calligraphy were completely worn out, artists wrapped them in silk and buried them in a beautiful place. In other cases, when the artist died, his tools such as his brushes, were cremated with him or buried with him. There was a cultural acceptance of reverence in handling tools that were used in the creation of art.

Considering the reverence traditionally educated Chinese scholars had for the brush and ink, their interest in the inkstone was even greater. The inkstone, which was used to grind the ink, was considered the very soul of a scholar’s library.

A historic tile mounted on the wall of a museum in Florence, Italy, (I think it is in the Opera di Santa Maria del Fiore), has a carpenter’s toolbox chiseled into it. Chiseled in Latin on the toolbox in the tile is an admonition to not steal the tools from this carpenter under fear of a spell being cast on you. So, even in Medieval Italy there was a concern by craftsmen to treasure and protect their tools.

A few years ago at the Straus Center for Conservation and Technical Studies at the Harvard Art Museum, I demonstrated the watercolor techniques of an American artist of the late 20th Century, John Singer Sargent. They brought Sargent’s paint and brushes out from the collection to me. It was extremely informative to examine his tools.

Sargent used very few brushes and one brush in his assortment had been sawed off. That was a bit mystifying to the conservators. Yet to me as an artist, it seemed familiar and practical. I have sawed off long-handled brushes to fit in my brush box. Many artists I know have done the same. For me, the sawed off brush was an example of seeing how another artist solved a practical problem of managing his tools. 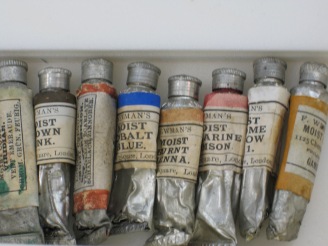 Watercolor paint of John Singer Sargent on the left. Brushes of the artist on the right. The sawed off brush mentioned in the post is at the bottom of the image. Both brushes and watercolor paint are in the collection of the Harvard Art Museums, Cambridge, MA.

At the 2008 Winslow Homer exhibit at the Art Institute of Chicago,[i] the paint box and brushes used by the artist were displayed online and in the exhibition. The Art Institute also presented in-depth, step-by-step videos featuring contemporary watercolorists demonstrating the brush strokes Homer used.  When you watch an artist create in his medium with his tools it is revealed to you how differently a master uses a tool as compared to the neophyte.

I have found this to be true even with my students. More than lectures or even working on their own paintings, watching me paint was what they asked for most often. Frequently, they say they absorbed the most from my demonstrations.

At the Missouri Botanical Garden, one year I was the “Artist of the Month”. I demonstrated painting for a couple of hours each Saturday in the garden. There was a woman who stopped by each week to watch me paint. She stayed for the full two hours. She never said anything except she just “needed” to be there to watch me paint. In more ways than one, watching an artist use her tools, or simply watching paint dry can be a gift of relaxation and diversion.

This was part of my logic in naming my company, “Watching Paint Dry”. Although typically used as a joke for boredom, “watching paint dry” has more potential benefits than superficially evident. Watching someone use tools can be enlightening in many ways.

As you think about your tools, think about the your knowledge, experience, commitment, and confidence that puts the magic into the work that you do.

Two of my set-ups for painting. Watercolor on the left and oil painting on the right. Different media, different scenes and moods.

I am a lifelong artist having studied painting, photography, drawing, and other media, in schools in the US and Italy. I won my first art contest when I was five--at a museum-- and my point of view tends to be as a five-year-old creative child embracing life. Check out all sort of artsy information at: www.watchingpaintdry.com and purchase my artwork at: janemmason.com +++++++++++++++++++++++++++++++++++++++++++++++++++++ This policy is valid from 1 January 2016. This is a personal, educational, blog written and edited by me, Jane M. Mason. For questions about this blog, please contact: jane@watchingpaintdry.com. Sincere effort has been made to cite, recognize, and thank all sources of content, including images. If you feel we have included something in this blog that has not been accurately noted or recognized, please let me know and I will adjust the citation when presented with details. If you are interested in using intellectual property from this blog, please contact Hello@watchingpaintdry.com. This blog does not accept cash or paid topic insertions. However, we will consider accepting free products and other forms of compensation. The compensation received will not influence content. All advertising is in the form of advertisements generated by a third party ad network. We do not have control over the products advertised. The views and opinions expressed are those of Jane M. Mason or the associates of WPD LLC. We only endorse products or services that we believe, based on our expertise, are worthy of such endorsement. Any product claim, statistic, other representation should be verified with the manufacturer or provider. This policy has been adapted from DisclosurePolicy.org. For your own policy, go to http://www.disclosurepolicy.org

This site uses Akismet to reduce spam. Learn how your comment data is processed.